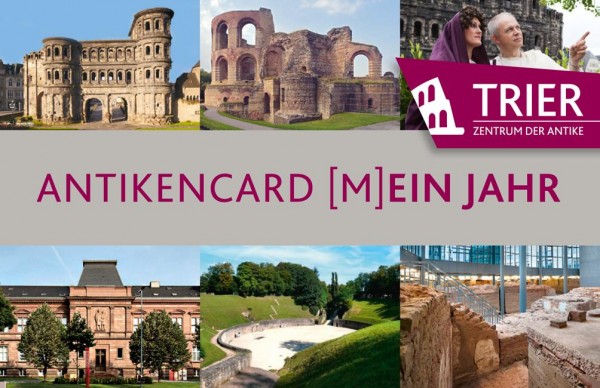 
With the ANTIQUE CARD MY YEAR you have 365 days free entry into the Roman Monuments of the Center of Antiquity: Porta Nigra, Imperial Baths, Amphitheater and Spas at the cattle market. At the original locations of Trier's Roman past can Immerse yourself in the history of the once-largest Roman metropolis north of the Alps as often as you like.

The ANTIQUE CARD [M] ONE YEAR is personal, non-transferable and valid only with a registered name and on presentation of the identity card.
The card is valid for one year from the date of purchase.
Please note that when you purchase online, you enter the date + 2 days so that the card is directly usable when you receive it.
Of course, if you prefer a different start date, this is also possible. It is possible to start the card within a period of 2 months (after purchase). If you wish, please let us know when you buy! Otherwise, the date is entered as already written.

It entitles to free admission to four monuments of the Center of Ancient World - Porta Nigra, the Imperial Baths, Amphitheater and Thermal Baths on the Viehmarkt - as well as to the permanent and special exhibitions of the Rheinisches Landesmuseum Trier, which are included in the museum admission. It is only valid during the opening hours and does not include participation in special events, tours or other offers, except for public Sunday tours in the Landesmuseum through duration or special exhibitions as well as admission to the Roman festival in the Kaiserthermen. Excluded is the free entrance to events from third-party providers. Exchange, return, refund and compensation for loss are excluded.